How things will continue with Rolli Auctions & Philately

Christina Rolli will continue to run Rolli Auctions & Philately as planned on a small scale in the new premises.

For 40 years the auction house and stamp store Rolli-Schär AG was located in the city of Lucerne. First, in 1978, the company moved from its home office in Horw to Kapellgasse in the old town. When these locations were bursting at the seams, the move to Seidenhofstrasse 10 in 1989 was followed by a move to premises twice as large. In 2004 the owner registered his own needs and the management of the first and the new, second generation had to look for suitable premises again. Coincidentally, the fourth floor of the Migrosbank building on the same street was vacant. These rooms were again twice as large as the previous premises and were ideal for carrying out stamp auctions in the company's own premises, given the ever-increasing volume and the complex IT infrastructure required. Previously, the auctions were held first in the familiar Schwanen-Saal, later in the elegant Kunsthaus and, when this was demolished, in the practical Hotel Continental.

Now this era is coming to an end for the last renowned stamp store in the city of Lucerne, and the move will take place to Rothenburg, right next to the highway exit, 5 minutes from the train station and with a bus stop in front of the door. The reasons for this step were the lease contract, which will probably expire, the rental price and especially the unsatisfactory traffic situation in the city of Lucerne. For the stamp auctions, between 10 and 20 tons of goods are transported in and out each year, and the proximity to the highway is ideal. The new premises are the same size as before, and offer enough space for a spacious and bright store for stamps and accessories. The auctions can take place as before in our own premises. After Rolli developed a new image two years ago and purchased the latest generation of IT infrastructure, this is now the next logical step into the future.

The move of the 6 safes with a weight of between 400 kg and 1100 kg by crane was a precision work of the highest order by Gmür Transporte, Emmen 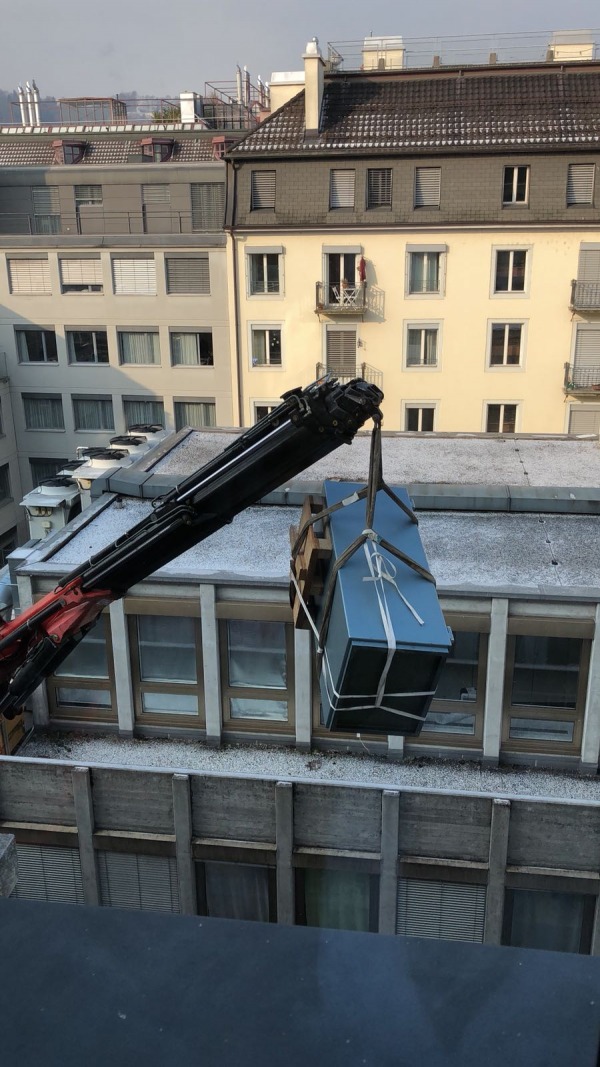